This past week was Addie’s 2nd birthday. People aren’t joking when they say that time really does fly when you have a child. I attribute this to the lack of sleep. For the past two years I’ve been walking around in a sleep deprived haze in which one day blends seamlessly to next. 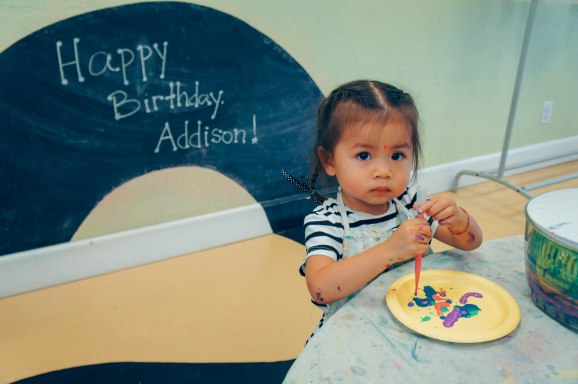 Addie’s Birthday Party
We had a small low key event where we invited a few of Addie’s friends to a children’s art studio named Averyboo Arts in Long Beach. There were painting stations, arts and crafts, spinart, and many other toys and costumes for the children to play with. The party only lasted two hours and ended with pizza and story time. It was the perfect amount of time for my daughter.

Having a party at a location other than your house is the way to go. Everything is setup for you, there’s no clean up, and you’re in and out in a few hours. This was far less stressful than the year before when my wife and I had her birthday party at our home. Addie had a great time playing and painting with her friends.

All I thought of was all the things I would lose by becoming a parent. No free time, less money, no sleep, no social life, no time for myself. I used to look at parents and pity them for spending most of their days cleaning up and caring after their kids and not having any time for themselves. I used to listen to former coworkers talk about how going to work kept them sane because it was a break from their kids.

Who wants that life? I didn’t.

So while I knew my wife wanted to have kids sooner rather than later, I delayed and delayed it. I was waiting for that perfect time – when we’d have more money, established careers, and after we traveled the world. AFTER WE ENJOYED OUR LIFE. We were married for seven years (together for 15!) before we had Addie.

Parenting Ain’t Easy
Nothing can truly prepare you to become a parent. I thought I had an idea because I babysat, listened to friends with kids, and read What to Expect When You’re Expecting.

That all went out the window when Addie was born.

Waking up in the middle of the night to clean vomit and change diapers sucks. Not having time to yourself is tough. There were many times when being a parent has put a strain on my relationship with my wife as the focus is on the tiny human being that we created.

It’s all worth it.

All the hard times of being a parent are outweighed by all those amazing moments being a father brings. It’s amazing seeing Addie grow from a tiny baby to a rambunctios toddler. Watching Addie smile, laugh, or repeat a silly catchphrase I taught her (peace out homies!) makes everything worthwhile. I now understand all those parents that post every single thing their kid does on Facebook – because everything your child does IS awesome.

Becoming a parent is the one thing in my life that has truly made me feel alive. Yes, I had a pretty good life and an awesome wife who always encouraged me and believed in me. But it wasn’t until I became a father that I truly felt I found my purpose: to become the best damn husband and father I can be. Since Addie was born I have been continually hustling to be able to provide the best life I can for her.

Of Birthdays and College Funds
My wife and I budget $1000 a year for Addie’s birthday. For those who think that’s a crazy amount for a birthday, you must not be a parent ;). Between hosting a party, booking a location, getting food, entertainment, and buying gift bags for the kids who came (a must!) it isn’t too hard to hit $1000 for a birthday party. And if you do something extravagant like have pony rides? Sheeeeit…….

As a Budget nerd, I’ve been saving $83.33 since last May so that we would have enough for Addie’s birthday. I was doing this even during the few months that I was laid off.

We intentionally budget a lot more than we intend to spend for Addie’s birthday. Every single penny that’s left over after the birthday party we put towards her college fund. This encourages us to be a little more mindful when it comes to spending on her birthday. By the end of her birthday we dumped an extra $300 into her college fund.

As I’ve written in a previous post, birthdays and holidays are a great time to have a college fund setup for your child. In our evite for Addie’s birthday we included a link for her college fund. A lot of people I’ve spoken to love the idea of donating money towards Addie’s future rather than buy her a toy she’ll get bored with or an outfit she’ll quickly outgrow.  As a result of the link (and because I nerd out about it to anyone who would listen), Addie received $445 in gifts towards her education.

Currently, Addie has about $8000 in her 529 plan. I look forward to seeing what her balance looks like when she graduates high school.

To those who are wondering, yes – Addie still received a lot of toys. 🙂